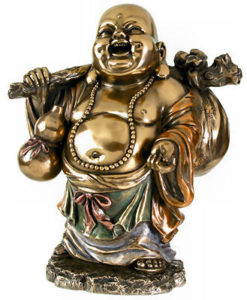 For decades, the Hotei Buddha has been a symbol of good luck.  Rubbing that belly, they say, brings wealth and all kinds of good luck.

… But that’s not a moneybag he’s carrying on his back.  It’s a bindle, containing everything he owns in the world.  He’s contented not because he Has It All, but because he needs nothing.

Eventually, though, the story went out that there were all kinds of good things in that bindle. Rice plants, so you would never go hungry. Candy, because don’t even little children deserve innocent luxuries?

And all this — the tension between these two different definitions of abundance — reminds me of an Affirmation for Pessimists that I once carried out in 3-D:

At one time, a young man visiting our neighbors went on a drug-fueled rampage and destroyed our car. We didn’t find out about it until the next morning (we were sound sleepers.) On top of that, a few weeks later, we were homeless. So the first thing we did was to buy a minivan — second-hand, in good condition — for which we paid spot cash.  Hey presto, we had not only wheels, but also a place to sleep.

And so, though most of my Positive Thinking friends differ with me on the point, I urge you: Set your feet on firm ground, then reach for the stars.  Here’s a Wealthy Way Affirmation for Pessimists:

The little I have today is all I need to achieve great things. I have already set my foot on the Golden Rule path to Easy Street.