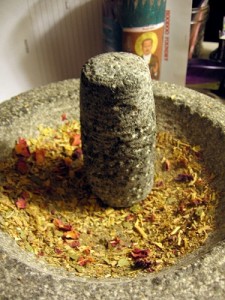 ell, I bought the molcajete you see in this picture, to grind herbs with. Most of my colleagues use coffee grinders and things — and some use graduated metal sieves so they practically don’t have to grind anything at all. But this was waaay cheaper. I found it in the local supermarket; we have a town with a sizeable Mexican population, so it makes sense for the gringo store to have these and tortilla presses and Ganesa crackers and things. (I haven’t seen another molcajete there since I bought this one; I’ll have to keep an eye out next week.)

I do also have a high-speed blender if I ever need it, but — the slower action of the molcajete gives more time for prayer and third-ear listening for the herb-spirits to talk back.

hat you see here is the first batch of my Venerable Matt Talbot herb blend. This is a new blend for someone who was going into rehab and needed spiritual support.

Matt (not Matthew) Talbot, if you haven’t heard of him, was a hard-drinking, hard-working, stand-tall Irishman who gave up on liquor one night in 1884. He relied on the church and on prayer to keep him on the right path, but his instincts — generosity, justice and industry — were good to start with.  Without good instincts, at least a little natural human rightness, a religious experience can go sadly wrong. Matt Talbot avoided the pitfalls, I think.

ince his death, Talbot has started on the road to canonization and has been adopted as the patron saint of alcoholics.

I’m going to continue offering this blend for baths and candles. Let me know if you want some.

2 thoughts on “Molcajete and Matt Talbot”