We’ve all had candle burns where the glass broke, was covered in a thick layer of black soot, or where the wick simply kept going out, or burned the label on the outside of the glass, or wouldn’t stay lit at all.

Too many people just throw up their hands and let “Fate” spit in their eye. Somewhere or other they pick up the idea that it ruins the spell to “manipulate” a candle to make it burn right.

So why stop there? Keep your scissors and butter knife handy, children.

(Maybe you can’t trust divination signs left by a “corrected” candle — my mentor, cat yronwode, is of this opinion. You might set a “test” candle beside it, just for reading signs when it’s done.) 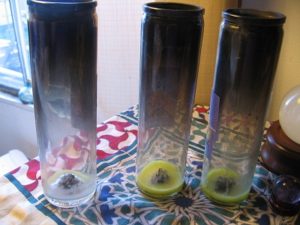 Now, a lying, dirty, low-down, scheming scam artist can force a sooty burn by partly blocking the top of a vigil candle. Of course you’ll never do that.

But seriously, the biggest producers of soot are overmuch oil, overlong wicks, drafts, and too little oxygen. So prevention is your friend here: be sparing with the oil; keep the wick trimmed; keep the candle out of drafts.

Wait, now: how do you trim a wick in a vigil light? You may be able to reach down in there with an icepick while the candle is still burning and knock “burnts” and accumulations of carbon off the wick. Or you may have to snuff it out (sometimes I use wrung-out wet cotton wrapped around the tips of chopsticks) and then reach down in there with a pair of scissors and snip it. You won’t be able to do that all the way down, though, since the blades of most commonly available scissors don’t reach much farther than 4 1/2 inches – and a vigil light glass is 8 inches tall. You can get 11-inch shears – but they’re spendy, and probably not a good investment for just a few candles.

Soot often doesn’t develop in a candle burn until the candle is half gone, because the tall glass restricts air. And yet most of the time, glass candles burn clean or nearly so. Overlong wicks make oversized flames — so keep that wick trimmed until it is out of reach of your scissors. 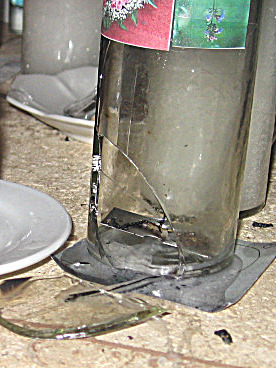 Even with the best materials and the greatest care, a wick can go crooked when a candle is made. It happens because the wax shrinks, often unpredictably, as it cools, pulling the wick out of true. When the wick gets pulled close to the glass, it can crack or break the glass and scorch or burn the label.

You can fix this while the candle is burning. Look down into the top of the candle and, if the wick is noticeably off-center, pry it back toward the middle with a long, sturdy object like a knitting needle, long screwdriver, or butter knife.

I don’t have a picture of this situation, because it happens to me so rarely.

Wicks drown when wax melts too fast. You’ll see a barely visible blue flame no bigger than a little seed, surrounded by a big pool of wax. Glass-encased candles often start this way, even when you end up with a nice clean burn. But if it persists for more than a day, it needs attention.

Some people pour the wax out.

Others put the candle out, let the candle cool for a while, and roll the candle so that the wax clings to the glass. This at least clears away the wax puddle so you can relight it. In my experience, though, the wax you’ve displaced to the wall just runs down and puddles around the wick again.

I prefer to splint wicks. It’s easier if you snuff the candle out. Let it cool and stab a little hole right next to the wick. Put a short piece of wick in that hole (this is why the pros save the little bits of wick they trim off new candles) and relight it. I stick my piece of wick onto the end of a chopstick with Tacky Wax and kind of “wipe” it off against the side of the little hole. Now you’ve got the power of two wicks to use up that surplus melted wax.

If you find the extra wick generates a big, soot-producing flame once it’s done its work, reach in there with a pair of kitchen tongs and pull it out.

You can also splint the wick if the original wick is NOT drowing but just won’t stay lit for some mysterious reason.

And those are some of the things I will do for you if necessary, when you have a light set on my altars.